India is one of the most progressive countries across the globe, which has larger potential and an enormous market with the population of 1.36 billion individuals. According to world bank’s data, India’s GDP in 2018 was recorded around USD 2.7 Trillion.

India is one of the most progressive countries across the globe, which has larger potential and an enormous market with the population of 1.36 billion individuals. According to world bank’s data, India’s GDP in 2018 was recorded around USD 2.7 Trillion.

Foreign companies invest in India due to abundance of resource, presence of labor at relatively lower wages and special investment privileges such as tax exemptions, etc. For a nation where, foreign investments are being made, it also means achieving technical know-how and generating employment.

Major Requirements for incorporation of company in India:

To start a company in India, a minimum of two persons and an address are required in India. A company at least should have two directors and minimum of two shareholders. According to Indian rules and regulations, one of the directors should be both a citizen and as well as resident of India. In this case, 100% of the shares of the Indian company can be held by foreign nationals/ NRI. The address in India is served as the registered office of the company. Foreign companies establish their offices in metro cities like Delhi, Bangalore, Mumbai and Chennai, Hyderabad etc. 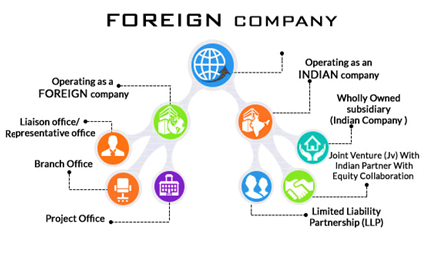 But why India? What are the main advantages of doing business in India?

Corporations in India are classified either into domestic corporation or foreign corporation.

What all options does the foreign companies have to enter the Indian market?

A foreign company planning to set up business operations in India has the following options:

A foreign company can begin processes in India by incorporating a company under the companies Act, 1956 through registration of company or establishing a branch or liaison office.

Starting a private limited company is the coolest and fastest way to set up in India. FDI of up to 100% into a public limited or private limited is permitted under the FDI policy.

Under the automatic route, FDI up to 100% is allowed in all activities/sectors, except in some of the cases which requires prior approval of the government.

Let’s have a look at the subdivisions where FDI is not allowed in India, under the Automatic Route as well as Government Route?

FDI is forbidden under Government as well as Automatic Route for the following sectors:

FDI in activities not covered under the automatic route requires prior Government approval and are considered by the Foreign Investment Promotion Board (FIPB), Ministry of Finance. Request can be made through Form FC-IL, which can be copied from www.dipp.gov.in.

What will be the next step, once the investment is made under the Automatic Route or with Government approval?

A two-stage reporting procedure has been introduced for this purpose.

On receipt of money for investment:

Upon issue of shares to non-resident investors:

Within 30 days from the date of issue of shares, a report in Form FC-GPR, PART A together with the following documents should be filed with the concerned regional office of the Reserve Bank of India.

What is the procedure to be followed for obtaining Reserve Bank's approval for opening Liaison Office?

What is the procedure for setting up Project Office?

What is the procedure for setting up branch office?

Reserve Bank permits companies engaged in manufacturing and trading activities abroad to set up Branch Offices in India for the following purposes:

Can a foreigner invest through Preference Shares? What are the regulations applicable in case of such investments?

Can a foreigner set up a partnership/proprietorship concern in India?

No, only NRIs/PIOs can set up partnership/proprietorship concerns in India. Even for NRIs/PIOs (Non-resident of Indian/Person of Indian Origin) investment is allowed only on non-repatriation basis.

What are the key businesses related legislations in India? 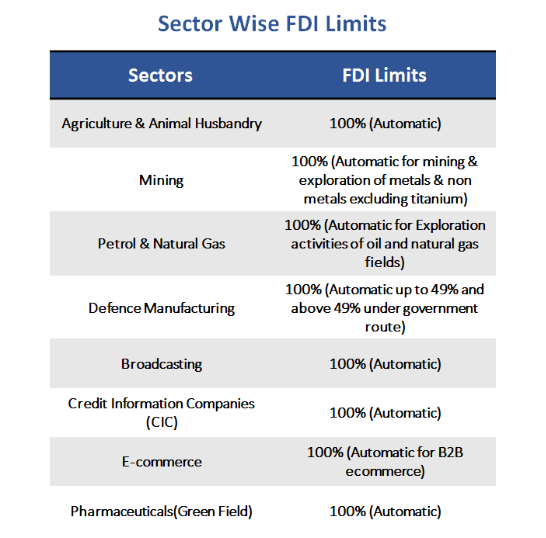 As of January 2019, India allows 100% FDI in marketplace model of e-commerce; however, there is no FDI for inventory driven models.

Foreign companies can sell their goods and services to other businesses since 2015 (with 100% FDI permitted under automatic route for B2B (Business to Business) e–commerce in India).

However, there are some restrictions on B2C with a few limited exceptions like: